After 25 years of EU Health Policy, the EU has fallen into a trap on disease prevention –how can it escape? 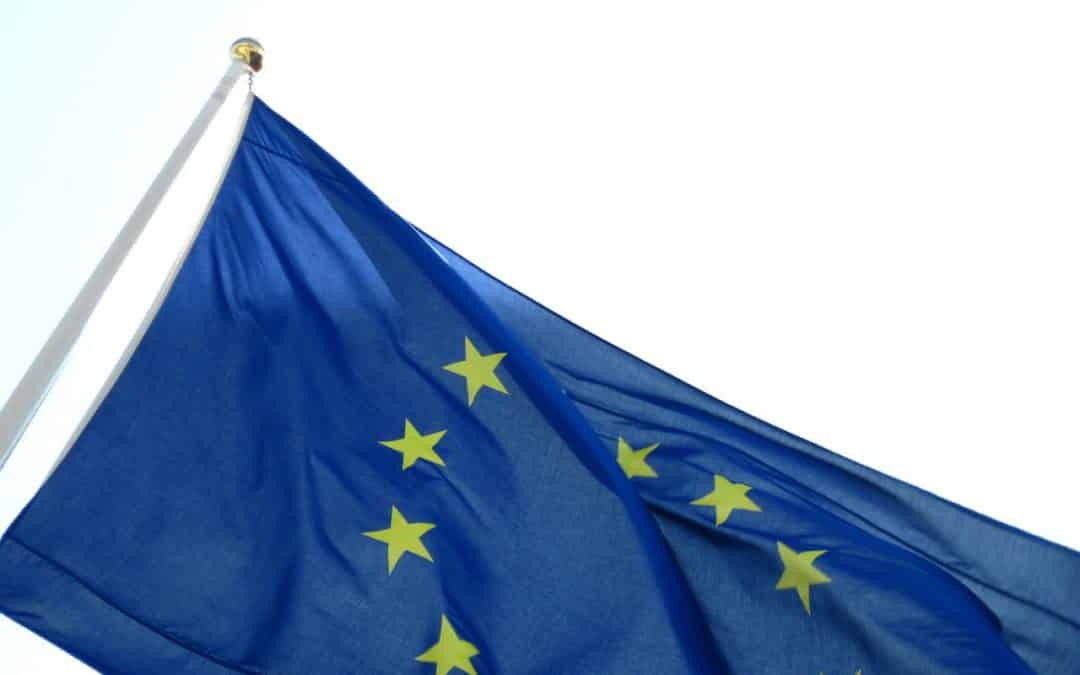 Often when it comes to international negotiations, be they on trade, development, human rights or climate change, Europe’s reputation – or more specifically that of the EU – and self-image is one of being a progressive champion of good causes. We’re a great supporter of sustainable development… right? Not so, when it comes to the EU’s role in health.

The reality might well surprise many Europeans. We’ve been told that our smoke-free spaces, alcohol taxes, colour-coded food labels, and measures to curb the amount of added sugar in drinks are world leading. That might have been the case a few years ago. But the truth is we have been leapfrogged by other parts of the world and are now lagging behind.

In terms of world-leading policies, some of the most impactful measures are being rolled out far from our shores. The soda tax in Mexico is taking on the obesity and diabetes epidemic which was imported with the Nafta trade deal. Chile’s black labels for foods packed with added sugar, salt and fats are proving more understandable to consumers than coloured charts and percentages. Uruguay and Australia are showing the way with plain tobacco packaging. The US and Canada have banned artificial transfats. All countries in the Caribbean have national strategies to tackle non-communicable diseases. By those measures, the EU is a laggard.

It’s not just about our reputation of course. The EU’s dithering on health is taking a toll on all of us. Europe remains the heaviest drinking region worldwide, by some margin. And tobacco policies, despite the EU having led the way in the adoption of the Framework Convention on Tobacco Control (FCTC), are patchy – with glaring gaps in Germany, Austria and the Czech Republic. As a result, tobacco still kills 700,000 Europeans every year.  To this toll can be added outdoor air pollution which kills around 400,000 people in Europe every year. Despite the outcry following the #Dieselgate revelations in 2015, the fatal loopholes in the EU’s air pollution standards still have not been closed.  Making the largest contribution, however to the burden of disease in Europe is unhealthy food and drink, with the marketing of these products to children and young people being a particular concern.

How did Europe lose our edge? It seems that under pressure from health-harmful lobbies, how EU decisions are made has been fundamentally changed, seriously impacting everyone’s health.

In 2015, the EU Ombudsman slammed the European Commission for failing to comply with the UN Framework Convention on Tobacco Control, to which it and all European governments have signed up. And despite this global Convention saying policy-makers should refuse to meet with an industry whose products go on to kill most of their customers, it is painfully clear that the tobacco industry is still entertained at the EU institutions, particularly by the European Commission’s Trade Directorate, as EPHA recently revealed.

Trade Commissioner Cecilia Malmström responded to EPHA last month that “tobacco is an agricultural commodity like any other” as a justification for having prioritized tobacco trade and investment in current trade negotiations with Latin America and Japan. All four Mercosur countries have smoking rates far below European averages – much to lose for health, or an untapped market for the tobacco industry. Is DG Trade blissfully unaware or willfully ignorant that the FCTC explicitly requires governments to handle tobacco very differently to any other product?

But it gets worse. Commissioner Malmström has recently teamed up with the European spirits lobby – penning the introduction to their annual trade report which calls for any reduction of tariffs in Latin America not to be compensated by increases in taxation. Trade deals bring trade-offs, and the EU has chosen to put the goals of European tobacco and alcohol lobbies ahead of their own commitments to sustainable development at home and abroad. This kind of trade is neither free, nor fair.

In Brussels, we’re seeing health-harmful lobbies take on a variety of disguises and team up with other industries to circumvent the FCTC rules, pretending to be “smokers’ rights advocates” or champions of “consumer choice”. It doesn’t take much digging to find tobacco funding and unveil whose agendas they are really advancing. Only 10% of smokers don’t want to quit – so when it comes to smoker’s rights, health organisations are doing a far better job of protecting them. The genuine EU consumer organisation, BEUC, advances a pro-health agenda.

Junk food industry lobbyists have long been copying tobacco tactics.  As an illustration, see Figure 1, the famous “Coke Leaks”. The 2011 Regulation on the provision of food information to consumers was at the time, apparently the most heavily lobbied piece of EU legislation ever. The food and drink industry succeeded in pulling most of the teeth from the proposal. But the Commission was, at least, still required by a law from 2006 to define the thresholds for healthy and unhealthy food and drinks, by means of nutrient profiles. Twelve whole years later, they’ve failed to deliver. But the food and drink lobby won’t stop at that. They convinced MEPs in April 2016 to propose to “eliminate the concept of nutrient profiles” to block the Commission from delivering. Which begs the question, what do they want to hide from customers? 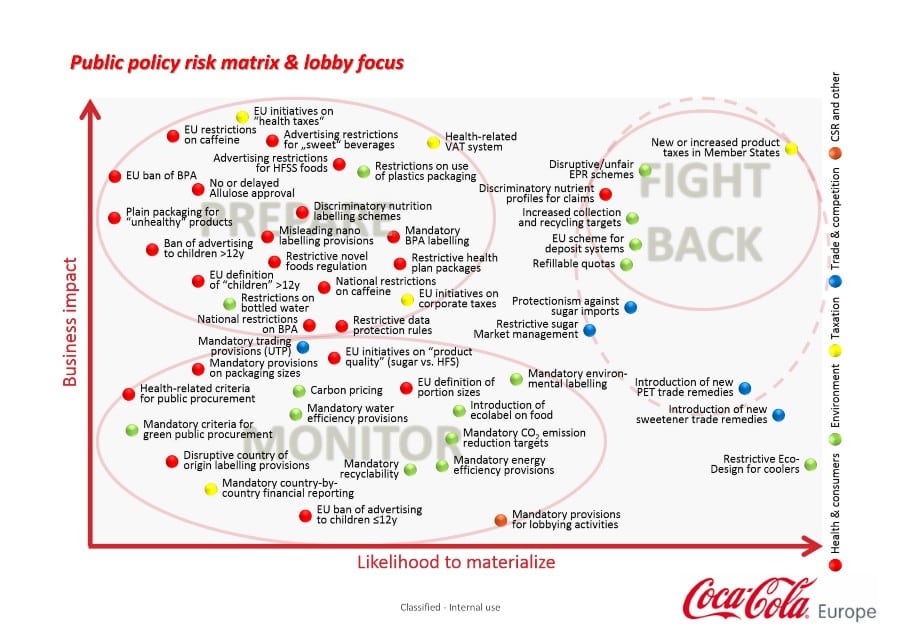 The proposal to “eliminate” this fundamentally good idea comes from a non-binding Parliament report on a process known as REFIT. If it sounds dull and obscure, well, it’s supposed to. Under the allegedly harmless guise of ensuring that EU laws are fit-for-purpose and to cut red tape, lobbies are exploiting the process to try to dismantle health protections already in place, and to knock out any EU good intentions for the future. Thanks to REFIT, it’s never game over for the health-harmful lobbies.

At the same time, the EU’s failure to apply its own impact assessment rules to look at health is causing preventable headaches for the regulators. For example, the recent proposal for an EU Circular Economy Package – to reduce waste, reuse and recycle. Sounds great, right? But the failure to consult health experts properly ahead of the proposal meant that the Commission suffered a nasty side-effect. They were surprised when we pointed out that in some cases, for example carpets, promotion of the circular economy whilst ignoring health could serve to force carcinogenic and toxic substances into our homes, workplaces, schools and creches for years and maybe decades to come.

The mantra of evidence-based decision-making is all well and good. The evidence is very clear when it comes to which measures are most effective in protecting public health, they are tried and tested by the World Health Organization. Evidence is also very clear that voluntary commitments by vested interests do not work.

The experience of recent years shows that REFIT and endless “Better Regulation” consultations are designed to create roadblocks, hurdles, loopholes and ultimately paralysis by analysis. EU assurances that standards of protection will not be lowered, ring hollow when there is no action towards strengthening them, when health impacts are ignored, and when EU trade negotiators are travelling the world championing health harmful products. In the absence of action, we can only conclude that the rules of the EU game have changed to protect the regulated instead of our health.

If the EU wants to recover its reputation as a progressive global power and escape the trap set by conflicted interests, there’s never been a better time. Not least because of next year’s European Parliament elections and the renewal of European Commission. It will take just three steps: