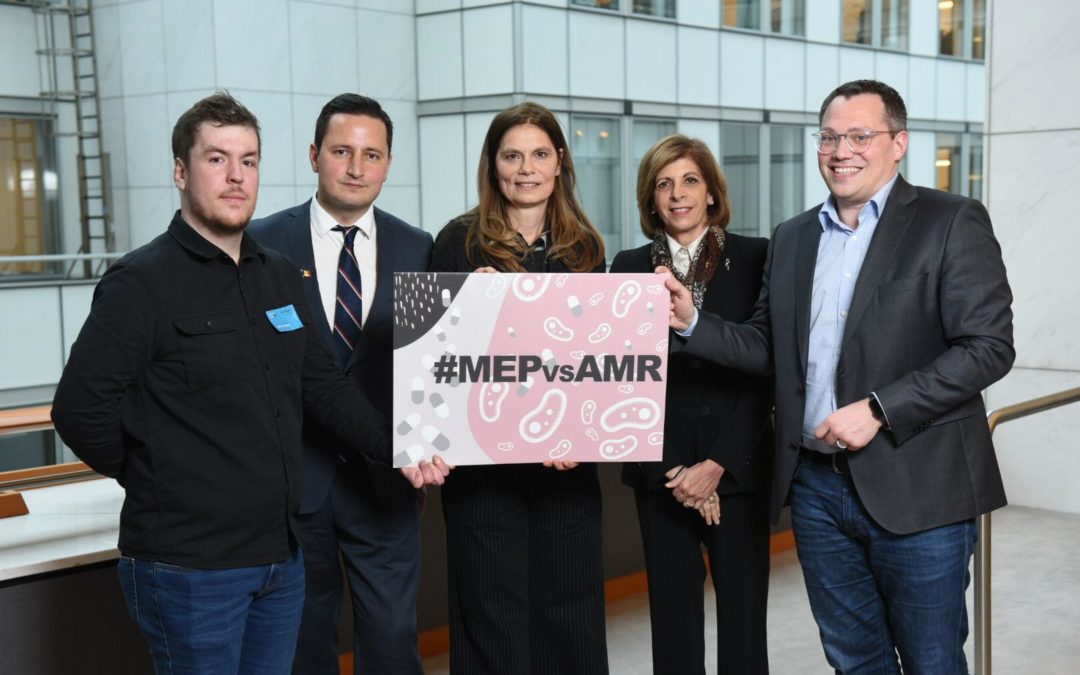 A packed room of key actors, including Health Commissioner Stella Kyriakides, committed to tackling Antimicrobial Resistance (AMR) from a One Health approach, joined MEPs for the launch  of the MEP interest group on AMR which took place on 19 February 2020 in the European Parliament

The new MEP Interest Group, composed of fifteen MEPs from across the political spectrum, is the only AMR-dedicated group in the European Parliament. Its establishment is a sign that the European Parliament can -and is ready to- play a key role in the fight against AMR and work hand-in-hand with the European Commission, the Member States, international organisations, civil society and all stakeholders, who all have a part to play to protect all Europeans from this growing global health threat.

Driven by a comprehensive strategic work programme guiding its activities for the parliamentary term 2019-2024, the MEPs fight AMR Group champions a cohesive and ambitious One Health approach addressing human, animal and environmental health. The programme, drawn up by Members of the Interest Group with the contribution of AMR Stakeholder Network members, highlights 3 overarching goals and the activities and actions of the Group will be focused on 8 objectives, including raising awareness on AMR, mobilising dedicated financial support for AMR-related investments, supporting efforts to ensure high standards of infection prevention and control across the EU, fighting pharmaceutical pollution and supporting quality and accessible innovation.

European Commissioner Kyriakides, stressed that taking effective action to tackle AMR is one of the Commission’s key priorities in the area of health and she looks forward to working closely with the European Parliament to this effect in the coming years. “The next few years are critical…Together we form a strong alliance in the fight against antimicrobial resistance, and together we can bring change. Let us therefore join our forces over the next five years to bring lasting change against antimicrobial resistance”.

The reality of living with AMR was brought home to everyone present by Silviu Ciocanelli, a musician who survived severe burns from the 2015 Colectiv nightclub fire in Bucharest, only to contract multiple drug-resistant infections during his hospital treatment. Years after, living with AMR remains a daily struggle for him. Standard treatments such as going to the dentist have become potentially life-threatening: “One of the outcomes of having AMR is that I’m very disposed to getting ill and when disease strikes, it carries a risk. I need very strong antibiotics against bacteria that threaten my life and you know that you have to live with this forever…”. Silviu made an emotional plea for common EU efforts to be taken to protect Europeans NOW: ” Please do all your best. We need your help to have better health systems in the part of the EU from where I come from, because ultimately, this is a Union.”

In response to this moving testimony, Vice-Chair of the Interest Group MEP Nicolae Ştefănuță (Renew Europe, Romania) proposed a 1-minute silence in remembrance of the victims of the Colectiv tragedy, stating that “What we do is beyond policies, it’s about people. We have a duty of care towards Europeans. “I do not believe Europe can be a space of haves and have nots”, adding that when it comes to health, European citizens expect the EU to intervene and dedicate funds to health policies, particularly when countries cannot do it alone.

There was also a call for urgent action to be taken at EU level to support Member States’ efforts, mobilising resources and funding to facilitate the development and implementation of One Health National Action Plans. In addition, “funding under the Horizon Programme and its instruments across all relevant sectors must be increased, including for the development of new antibiotics, diagnostics, vaccines and alternatives to antibiotics”, said Vice Chair MEP Tiemo Wölken (S&D, Germany). Referring to recent WHO reports revealing a weak pipeline in antibiotic development, MEP Wölken added that “We must find new ways to address the obvious market failure in research and development of new antibiotics… keeping the public interest at the heart of innovation, and ensure affordable, accessible, quality antibiotics for all.”

Other Members of the Interest Group, namely, MEP Sara Cerdas (S&D, Portugal) spoke of AMR and climate change as being threats to human health and our planet and both requiring a concerted and multi-stakeholder response. MEP Tomislav Sokol (EPP, Croatia) stressed the cross-border element of AMR and the way in which he believes that even within the limitations of Article 168 TFEU, the EU has a strong legal competence to tackle AMR through regulatory measures as well as ensuring that various EU financial instruments are used to support national AMR-related actions.

Dr Andrea Ammon, Director of the European Centre for Disease Prevention and Control (ECDC) welcomed the Interest Group’s ambitious work programme and in a video message, reiterated the priority that the Agency has placed on combatting AMR. Promoting prudent use of antibiotics and implementing Infection Prevention and Control practices, starting with hand hygiene in hospitals and long-term care facilities, is a key element to combatting this threat. ECDC’s take home message was all-encompassing: “everyone is responsible for addressing AMR:  patients, doctors, nurses, pharmacists, veterinarians, farmers, policymakers, MEPs, you and me”.

The multi sectoral One Health focus in combating AMR was also reflected in the interventions of representatives of the UN Tripartite organisations collaborating on AMR (FAO/OIE/WHO), highlighting the importance of a global response to minimising the emergence and spread of AMR.

Commissioner Kyriakides also made several links between AMR and other policies, namely sustainable food systems reflected in the upcoming Farm to Fork Strategy and Commission plans for a more holistic pharmaceutical policy, addressing market failure in the area of antibiotics. Ortwin Schulte, German health attaché, also brought to the table the upcoming incentives review, noting that AMR could be covered in this exercise.

Both the Commissioner and MEPs in their strategic work programme, also referred to protecting immune-compromised people such as cancer patients, who are more exposed to life-threatening infections, and more vulnerable when antimicrobials are no longer effective. In fact, as Jerome Weinbach from the French Ministry of Health and a member of the EU-JAMRAI coordinating team, put it, “there is no cancer treatment without antibiotics”, in his intervention which also raised the question of addressing shortages of existing antibiotics. This was supported by EPHA’s member, the European Association of Hospital Pharmacists, which highlighted the contribution antibiotic shortages are already making to increasing resistance, stressing the need to ensure availability of both old and very essential antibiotics and new antibiotics and alternatives.

In his concluding and visionary remarks, Professor Herman Goossens, Professor of Medical Microbiology at Antwerp University, reminded us that Europe can be applauded for its work and investment in combating AMR to date and “it’s a good story to tell to EU citizens but more needs to be done as otherwise it will go out of hand”. This new informal group of MEPs is yet another step forward in efforts to ensure Europe plays a leading role in actions to combat this global public health threat. As Interest Group Chair, MEP Sarah Wiener (Greens/EFA) said: “Our best shot at it is doing this together…We believe the European Parliament can ensure that AMR stays high on the EU policy agenda, and use our voices to demand urgent actions to tackle AMR under a One Health approach. We can and we will use our leverage to ensure that the Commission and Member States deliver on their commitments and implement effective action.”

EPHA, together with Health Care Without Harm Europe, co-hosts the Secretariat of the Interest Group, and is keen to continue working towards a more open and inclusive dialogue in the EU on AMR. Sascha Marshang, EPHA Acting Secretary General, believes “Europe has a role to play in building partnerships, taking advantage of the wealth of actors committed to taking action across sectors. The launch of the Group signals that civil society can play a key role in boosting efforts to tackle AMR. A few years ago, EPHA led a consortium of civil society organisations in delivering a Call to Action at the annual Health Policy Platform meeting organized by the European Commission. Today, EPHA leads a growing network of stakeholders committed to tackle AMR, which supports this Interest Group”.

The launch event kicked-off the activities of the MEP Interest Group but this is only the beginning. The next initiative of the Interest Group will take place in the autumn to mark the occasion of the European Antibiotic Awareness Day.