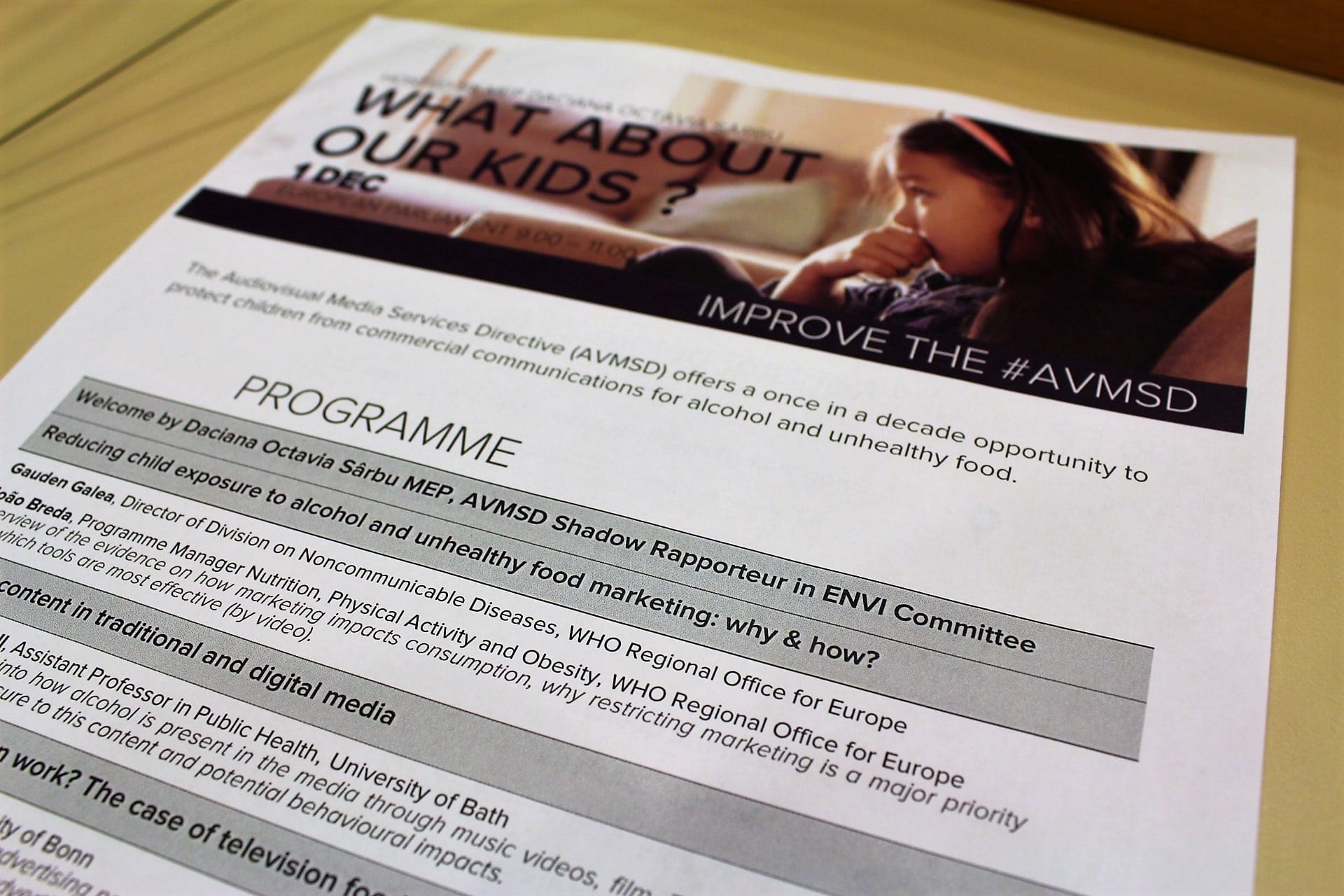 “Children’s health and Europe’s future must always be above commercial interests. I hope @Europarl_EN has courage & resolve to improve #AVMSD.” Tweeting after the event about the audiovisual media services directive, “AVMSD: What about our kids?” (co-organised by EHN, EPHA, EASL, IOGT-NTO, Eurocare and AIM), host MEP Daciana Sarbu, Vice-Chair of the European Parliament’s Environment and Public Health committee challenged her fellow MEPs to grasp the once in a decade opportunity to protect children from the impacts of marketing of unhealthy food and drink.

Dr Jo Cranwell of the University of Bath, presenting the results of her research on alcohol advertising in digital and traditional media, highlighted the pervasiveness of such marketing: for example, MTV’s Geordie Shore core audience is between 12-34 years old – 78% of each episode of the hit show she studied contained references to, or showed the characters using alcohol. She added that children who play today’s popular computer games which contain alcohol imagery are three times more likely to drink themselves. Dr Cranwell also highlighted the lack of regulation of online digital content, and the lack of involvement of major internet providers like Google in the debate. Alcohol is present in 45% of music videos on YouTube and on TV, to which, it is estimated, girls aged 13-15 are most exposed

Joáo Breda, Programme Manager for Nutrition, Physical Activity and Obesity at the WHO Regional Office for Europe, cut to the heart of the debate – that it is time to recognise that children and young people are a large part of the audience for adult shows, and look beyond only regulating material aimed directly at children, both offline and on. And as Ms Sarbu also tweeted, self-regulation and voluntary codes of conduct, “allowing companies to set bar very low” has not prevented, for example, rising levels of obesity amongst children and young people. The strain this is placing on already over-extended national health services was eloquently presented by Dr Erich Koch of the Sozialversicherung für Landwirtschaft, Forsten und Gartenbau (Social Insurance for Agriculture), who also stressed how social pressures on young people were intensified by advertising, affecting their self-esteem and mental health.

The implementation of an EU-wide watershed for TV adverts for alcohol, sugar sweetened beverages and sodas or foods high in fat, salt and sugar; the exclusion of alcohol and HFSS food from product placement and sponsorship; and ensuring that Member States can effectively limit broadcasts from other countries on public health grounds are the three main demands of the campaign to reform the AVMSD, to ensure that children and young people are protected from health-harmful marketing.  Now we must wait and see if, in the face of such overwhelming evidence, MEPs will grasp the mettle and take the opportunity they’ve been handed, to truly protect our children’s health.

By Nikolai Pushkarev, Policy Co-ordinator for Food, Drink and Agriculture