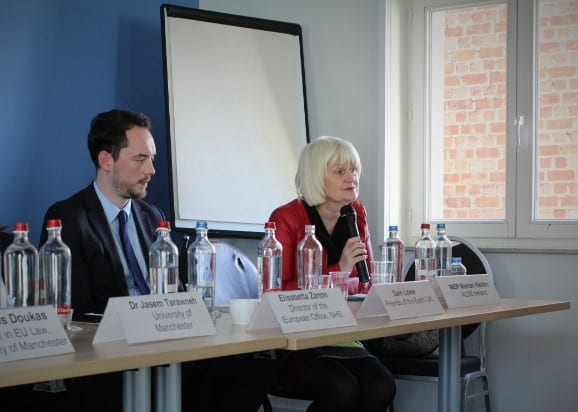 British and European patients are likely to pay a high price for Brexit, concluded Brexit, Trade and Health, an event organised by the European Public Health Alliance (EPHA) in partnership with the University of Manchester and the Economic and Social Research Council (ESRC).

Medicines may become more expensive for UK and EU patients -a side effect of the possibility of changes in parallel import law, as explained by Dr Jasem Tarawneh, of theUniversity of Manchester. Medicines availability could also be at stake for UK patients after leaving the European Medicines Agency (EMA) system, as illustrated by National Health Service (NHS) European Office Director Elisabetta Zanon. British-driven research and innovation will likely come to a screeching halt, unless the UK finds a replacement for the large amounts of health research funding from the European Union -well over €300m since 2014 according to NHS data¹. Patients all over the continent would suffer the consequences of this slower-paced innovation. The health workforce could be severely impacted as well, with the UK standing to lose about 144,000 EU-nationals working in health and social care, including 10% of NHS doctors².

Brexit will prove to be more than a bilateral negotiating effort for the United Kingdom. Questioning the capacity of the UK to simultaneously engage in negotiations on a variety of fronts, experts suspect the UK might wish to opt in to EU-US deals -for example, the recently agreed transatlantic mutual recognition of inspections of medicines manufacturers between the European Union and the United States³.

Uncertainty is never good for business according to the trade community, nor is a divergence between the United Kingdom and the European Union in terms of regulations for business, which is also the case for public health, social and environmental standards.

“We must focus on the public health implications of trade and investment policies not just in terms of a future UK-EU trading relationship but also UK and EU trade policy following the UK departure. With the Brexit debate and deliberations strongly focused on economic and legal consequences, our public health concerns are in jeopardy of falling by the wayside. It is crucial that we don’t relegate health care issues to some sort of second tier, behind the ‘big picture’” warned MEP Marian Harkin in her address.

UK Prime Minister Theresa May intends to trigger Article 50 on 29 March, and European Council President Donald Tusk has called a meeting for 29 April to consider the EU approach with regard to the negotiations with the UK. The European public health community will closely monitor the process.

We must focus on the public health implications of trade and investment policies not just in terms of a future UK-EU trading relationship but also UK and EU trade policy following the UK departure. With the Brexit debate and deliberations strongly focused on economic and legal consequences, our public health concerns are in jeopardy of falling by the wayside. We must bring health to forefront of our Brexit discussions.

Much of the debate concerning Brexit has focused on the more narrow economic and legal consequences of Britain’s departure from the European Union. From my perspective, the purpose of this event is to draw attention to the important public health consequences of disentangling the UK from the EU customs and regulatory unions – and to link this to the evolving shape of UK and EU trade and investment policy.

The UK’s main focus in its Article 50 negotiations must be to establish quickly its position at the World Trade Organization (WTO) as it may take some time to establish Free Trade Agreements (FTAs) with key partners like the EU and the US. Expect it to adopt EU tariff rates and many of the EU services regulations under GATS. With regards to a FTA with the EU-27, the UK will need to secure, as close as possible, its existing rights for financial services under some form of passporting or equivalence, since these represent such a vital component of the UK’s economy. ‘Global Britain’ envisions FTA with many other countries and the Commonwealth will likely be the starting point here given that these should present somewhat less difficulty in terms of common goals, culture and language. Negotiations under regional arrangements like the Trade in Services Agreement (TiSA) will also be crucial. It is far from clear that the UK government has sufficient capacity to engage in trade deals on multiple fronts and we should expect that resolution on these  matters will take several years.

Much of the debate concerning Brexit has focused on the more narrow economic and legal consequences of Britain’s departure from the European Union. From my perspective, the purpose of this event is to draw attention to the important public health consequences of disentangling the UK from the EU customs and regulatory unions – and to link this to the evolving shape of UK and EU trade and investment policy.

Brexit will have significant implications for a wide range of health and social care aspects of the UK-EU relations, such as cross-border healthcare services and co-ordination of healthcare and social security; free movement and recognition of professional qualifications of health and social care workforce; licencing and access to medicines, medical devices or clinical trials; public health, including communicable diseases and the impact of environmental protection; last but not least, market functioning and trade agreements concluded with third countries either by the UK or the EU.

Reader in Law, University of Manchester

A hard, no holds barred Brexit has the potential to drastically reduce the UK’s health research budget, affect the regulation of health determinants such as food, alcohol and tobacco and increase medicine prices in the UK. Blocking the free movement of people will in addition, severely damage National Health Service and cause greater unemployment and poverty in EU Member States that currently enjoy the right to work there. Ideally, the Brexit process should be stopped, however as it is more likely now to go ahead, a healthy
and sustainable agreement must be reached for the sake of everyone in the EU and the UK.

Brexit will have extremely important implications for trade and investment law and policy in both the U.K. and the EU. In turn, trade and investment law and policy can and does have important implications for public health. Accordingly, public health should be prioritised as a key concern throughout the Brexit process and beyond.

Lecturer in Law, University of Manchester

The Law regulating parallel importation and exhaustion of rights will possibly change after the UK leaves the EEA. The question then is how the UK will shape this part of trade mark law. It is unlikely that the UK will continue to be part of the community exhaustion regime given that it will be outside the EEA and common market. So the UK will either go down the route of a national exhaustion regime which would give trade mark proprietors the power to prevent the resale within the UK of any trademarked products which were not first marketed in the UK. This will greatly increase the potential for price discrimination, which will be popular with trade mark owners but will have a negative effect on British consumers’ welfare. Therefore, it is more likely that the UK will move in the opposite direction and adopt an international exhaustion regime that will allow “external” parallel importation with strict limitations in order to protect the legitimate interest of trade mark owners and safeguard consumer welfare. Determining such limitations is of great importance not only to consumers’ economic welfare but also to their health. Noting that one study estimated that 20% of branded pharmaceuticals sold in the UK are parallel imports. It is also estimated that just under 6% of prescriptions in the UK are now filled with pharmaceutical products acquired through parallel imports.

Lecturer in Intellectual Property and Commercial Law, University of Manchester