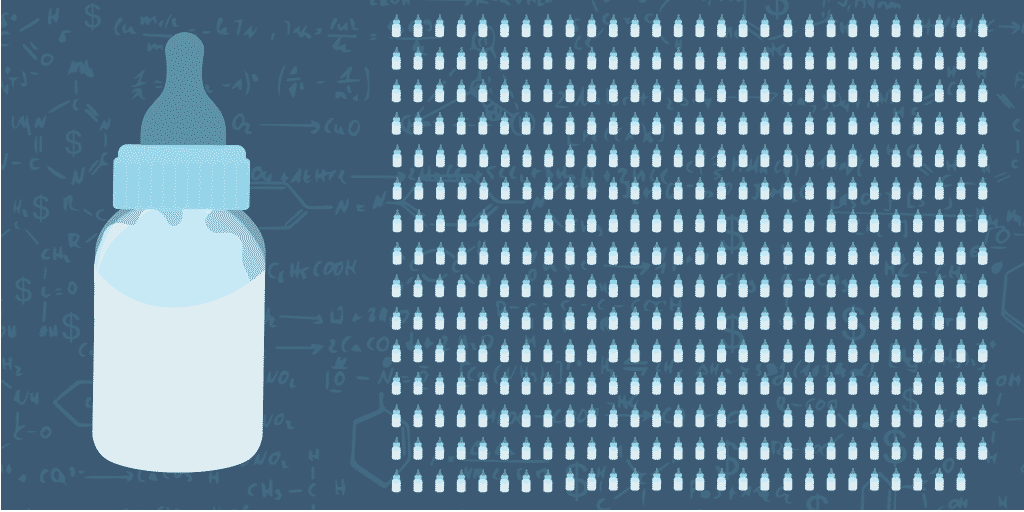 Europe’s ability to create a desired future, it is said, relies on its power to innovate.[1] Innovation is a cornerstone of the EU political agenda and integral part of the food policy debate. Initiatives like Food 2030, EIT Food, Food for Life emphasise innovation as an affirmative force for consumers. And true, without innovation there would, for instance, not have been a growing variety in tasty plant-based alternatives to meat, facilitating a shift towards more environmentally sustainable consumption; no start-ups growing mushrooms on coffee-waste; or an outlook on potentially promising sugar and salt reduction options.

But healthy caution is required. Like anything that is venerated, the halo of innovation may be misappropriated, leaving consumers deceived and possibly worse-off in terms of health. A recently published international investigative report on breastmilk substitutes is a case in point.[2]

The most ancient is the preferred source for child nutrition

The most complete, most personalised nutrition a child can get during its first six months of life is breastmilk, one of the most natural of human processes. For children who are not breastfed, manufacturers of infant milks should provide the best possible formula, as good nutrition in early life has profound impacts on a child’s overall development. This responsibility includes not deviating from generally accepted science, and not presenting products as nutritionally equal or better than breastmilk.

A review of products marketed by the top-four global infant formula manufacturers (Nestlé, Danone, Mead Johnson Nutrition and Abbott), however shows a totally different practice. It testifies that ‘being innovative’ does not necessarily equal better health.

There is only one global standard for the composition of infant milks set by the Codex Alimentarius – the collection of standards, guidelines and codes of practice established by the Food and Agriculture Organization and the World Health Organization.  Why, then, do the four companies market over 400 different products in 14 countries?

A key finding from the research is that despite the science-driven narrative behind compositional differences of products and a so-called ‘race to get closer than ever to breastmilk’, what really drives the proliferation of products offered is a strategy to increase market share and sales and product differentiation to maximise profits.

Manufacturers are marketing an increasing range of products for different age groups, products with additional nutrients, products claiming to solve general conditions, like reflux, and products with ingredients catering for various consumer preferences, like organic or palm-oil free. Different formulations are placed on different markets with little differences in nutritional value, suggesting there is little nutritional science and few health considerations behind these product ranges. 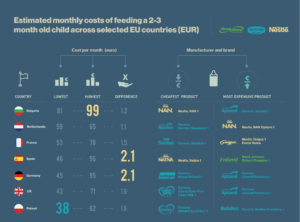 Why is this a problem?

Playing around with brands, prices and formulations seems innocent enough, one may argue, and if this kind of innovation adds company value and enhances consumer choice – what is the big deal?

First of all, experimenting with formula may not be without risk. Infant formula is not like any other packaged food on the market, but the sole source of nutrition for babies who rely on these products for their growth and development. Adding nutrients to the basic formulation, such as omega fatty acids, prebiotics, probiotics, nucleotides, oligosaccharides appears to have flimsy scientific backing, and could actually be harmful.

As the European Food Safety Agency’s (EFSA) 2014 opinion says: “the inclusion of unnecessary substances in formulae may put a burden on the infant’s metabolism and/or on other physiological functions, as substances which are not used or stored have to be excreted.”[3]

Secondly, the observation that today’s food environments, rather than only increasing choice, actually “exploit” people’s biological, psychological, social, and economic vulnerabilities[4] applies even more strongly to the case of infant milks. Parents understandably want the best for their children, and will go to great lengths to provide it, even if it significantly hurts the household budget. The halo of science-based innovation combined with a continued lack of adherence to the International Code of Marketing of Breastmilk Substitutes is bound to enforce the impression that formula may be equal, or even superior to breastmilk. The sum of these cues may result in full-blown consumer misleading, with potential long-term consequences for well-being of the most vulnerable in our society.

For example, check the description of Nestlé/Wyeth’s ILLUMA range, framed as “Science to Unleash the Innate Talent”:

“ILLUMA has integrated the remarkable mystery of nature to enhance the “Human Affinity Formula”. Following a baby’s natural nutritional needs more closely, to support their absorption of key nutrients. Help unleash their natural defence and illuminate their endless shining potential”.

Thirdly, this uncovers a vast ethical dilemma. Should it be proven that some of the additional nutrients in premium products actually are beneficial, the current practice of withholding ingredients from infants for commercial reasons can only widen socio-economic and health inequalities. When proven positive, the fortification of infant milks with such ingredients should be made mandatory in order to reduce the comparative disadvantages of breast milk substitutes. When they are not proven to be beneficial, they should not be used as a reason for charging higher prices for “premium” products, or not used at all.

This report is not meant to prevent the pursuit of innovation. What is needed however, is a more strictly regulated approach to ensure that innovation actually contributes to well-being and the public good, and in this particular case: that it does not exploit parents’ desire to give the best possible to their babies.