Fighting air pollution: there are more cars in Sofia than the average for the EU’s largest cities 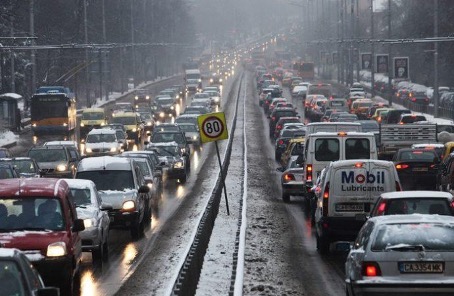 The CE-Delft report on the linkage between transport and the health costs of air pollution in European cities shows that Sofia is the most polluted city in Bulgaria with a record of € 2 084 damage cost per capita. In April 2021, Bulgaria’s capital adopted a programme for cleaner air for the period 2021-2026, however, there are significant drawbacks that call into question whether or not these goals will be achieved. These include disproportionate distribution of the budget towards sources of air pollution, as well as lack of ambition concerning the measures and expected emission reduction.

Over 83% of the budget is earmarked for transport-related measures, while reduced emissions from this sector amount to only 6% for PM10 and 5% for PM2.5. In the programme, the transport budget has been increased by almost BGN 500 million to BGN 2 billion, compared to the version presented for public discussion. Against this increase in funding, no estimates are proposed for any further reductions in transport emissions. In other words, the targets remain the same regardless of the higher budget.

The plan does not envisage the introduction of low-emission zones for domestic heating and the parameters of transport low-emission zones are not clearly set, putting at risk the programme’s prediction to meet the legal air purity standards.

There are more cars in Sofia than the average for the largest cities of the EU.

Current trends show a constant increase in car usage whilst travel by public transport is declining. In the Sofia Municipality there are almost 0.8 cars per adult, while the average level for large cities in the European Union is about 0,5 %.

Fighting dirty air: Only eco-cars on smog days and more washing of the streets in Sofia

At the same time, the programme aims to control heavy traffic in the city, with the centre becoming a low-emission zone. Cars with Euro category 0, 1 and 2  will not be able to drive there on days with higher concentrations of air pollutants in the atmosphere during the winter months. The municipality will continue to implement the “green ticket”, on days with highly polluted air when public transport costs are reduced to BGN 1. Increased street washing is also part of a new programme to improve air quality to eliminate the so-called muddy areas in the neighborhoods, which are the source of dust in the air.

The mayor’s office will also continue to implement projects to replace the old wood and coal stoves with new ecological heating appliances. Signing of contracts with approved households has also started, with 1500 households awaiting approval of their applications. The Sofia Municipal Council has also approved 5,500 grants and public procurement is underway for the supply of various types of heating systems. European funds have been attracted to replace the stoves of about 20,000 households with environmentally friendly systems, while work on installing chimney filters is also underway.