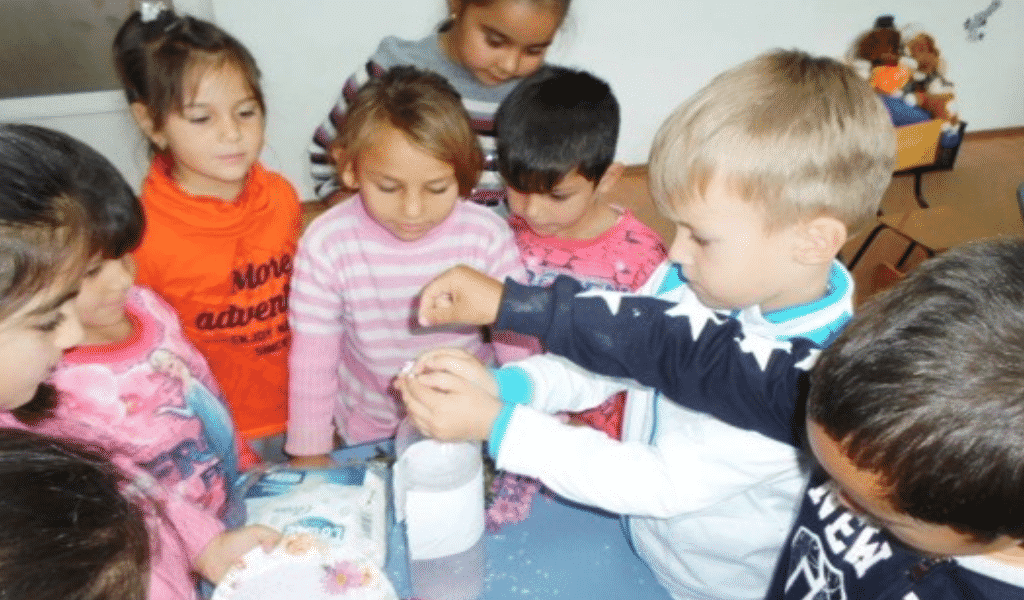 The creation of the Ready Set Go! project in Romania has supported over a thousand young Romani children and their families. However, as the funding is ending, the future of the project is in doubt. On the occasion of the International Roma Day on April 8, 2017, the Romani Early Years Network (REYN), the European Public Health Alliance (EPHA) organized a roundtable discussion in Brussels to discuss the future of similar projects. The event hosted by the European Foundation Centre’s (EFC) Forum for Roma Inclusion highlighted the benefits of pilot actions and identified additional ways to bring European Union policies closer to Romani children, to make the changes more sustainable.

Apart from few evocative photos, there is not much you can find about Gălbinași online, particularly if you do not speak Romanian. The village of a few thousand inhabitants is one-hour’s drive south-east of Bucharest. Not much has happened recently in the town, apart from the reopening of the recently renovated kindergarten and the quality services being provided by trained staff there, including Roma parents, as a result.

The locals tell us that Gălbinași has around sixty children of preschool age, vast majority of them Roma. Only twenty are lucky enough to get the chance to attend the reconstructed kindergarten. Originally built almost a century before and almost falling down until two years ago, the building has now become the centre of social life for Gălbinași’s youngest citizens and their families. While currently the kindergarten is ethnically homogenous, plans for more integrated services are currently discussed.

The Gălbinași kindergarten was one of fourteen new kindergartens built in eleven localities and six Romanian counties, where vast majority of children are Roma. The kindergartens and linked services, e.g. the toy library, reading corners and more, were established thanks to the Ready Set Go! project, organised by the Roma Education Fund (REF) Romania with partners and the support of the Norway Grants. Over a thousand young children and their parents have benefited from the project. However, after 29 months, the project funding is ending.

Records have been kept on the number of children and parents involved, the children’s attendance, the toys used by the children in the toy library and much more. Although it is perhaps too early to evaluate the impact of the kindergarten on the children’s educational achievements, their parents, knowing their own children the best, have already seen a clear boost in their development.

However there are many uncertainties about the future. Municipalities wonder how they can maintain the kindergarten and its services from their own budget. Local coordinators wonder if they should think about how to reach out to more children. Can the organisers of the project persuade the government to take it as a model and include it in the state budget?

What can the EU do to improve early childhood development?

At European level, Roma and pro-Roma civil society is seeking support in Brussels for increased attention to early childhood development. Recently, REYN, EFC and EPHA joined forces to coordinate efforts to look closer into the situation of young Romani children in Europe.

On April 10, on International Roma Day, we organised the first joint roundtable meeting with other nongovernmental organisations, networks, foundations and representatives of the European Commission. REYN and EPHA made presentations on the policies needed to support of the inclusion of Romani children, including the vital importance of early childhood development for Roma health and wellbeing during the whole life, as well as initiating a more thorough discussion focused on the needs of young children and their families.

One of the key policy processes which emerged during the day-long discussion was the comprehensive implementation of the National Roma Integration Strategies (NRIS) by EU Member States, which are believed not to properly reflect children’s specific situation in their policies, even though they were encouraged to do so by the EU. This was also highlighted at the meeting, as the EU carries out the mid-term review of the European Framework of the NRIS, the EU’s vital role in facilitating meaningful change for Roma. The discussions identified the key issue: Romani young children both are not considered in pro-children policies, and young children are not properly focused on within the pro-Roma policies. And to address this, more  grassroots voices need to be heard in Brussels and vice versa.

We at REYN and EPHA not only want to address the deficiencies of policies currently being implemented, but also look into the future. Together, we will work towards the development of sustainable systems, where all children including Roma and Travellers, have access to quality early childhood services. Together, we will make sure that governments understand the benefits and do not limit their initiatives only to kindergartens or preparatory classes. With health actors we will promote health as an inseparable component of early childhood development. We call upon philanthropy to become more active in the area of the early childhood development of Romani and Traveller children, as it is too often overlooked despite being crucial for Roma inclusion. And we call upon you to work with us to make sure there are no more lost Romani and Traveller generations.