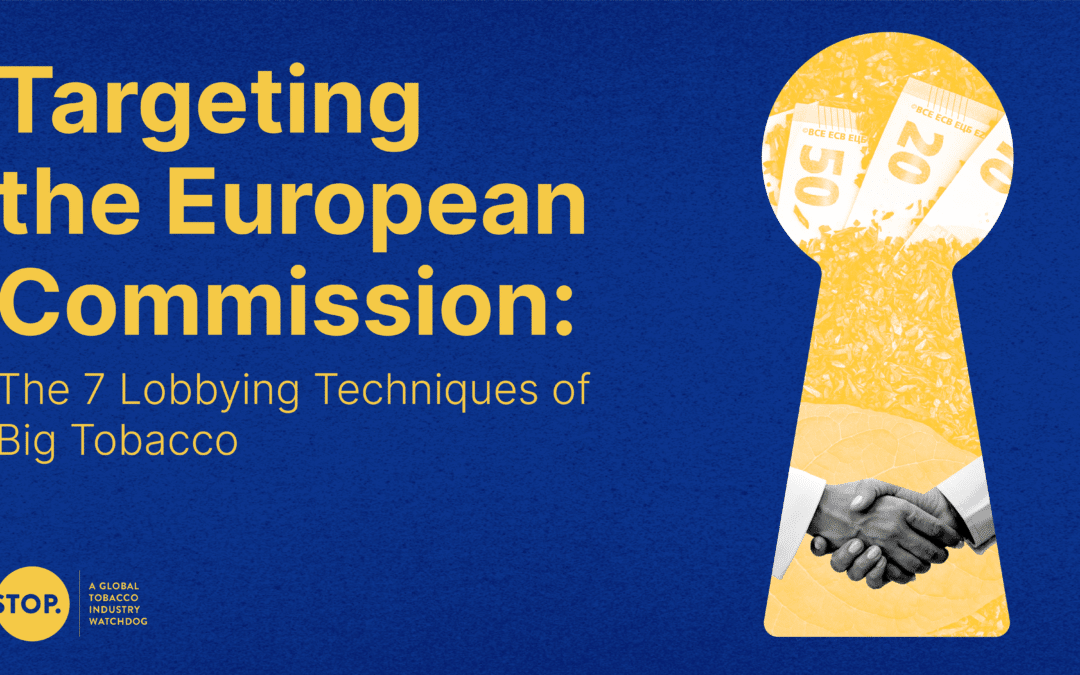 Brussels 10 March 2021 A new report, launched today reveals the continued and extensive contacts between the tobacco industry, its allies and pro-vaping groups and industry associations, and eight separate Directorates-General (DGs) of the European Commission (EC); and calls for a more proactive transparency system regarding such contacts, especially following the release of the Europe’s Beating Cancer Plan. The report, “Targeting the European Commission: The 7 Lobbying Techniques of Big Tobacco,” from Corporate Europe Observatory (CEO) and the European Public Health Alliance (EPHA), together with the global tobacco watchdog, Stopping Tobacco Organizations and Products (STOP) presents and analyses key contacts between tobacco industry representatives and the EC in 2019, identifying 7 overarching tactics used to influence tobacco control policy:

The report lays out these tactics, showing that tobacco companies are active and successful in exerting commercial influence across several EC DGs through letters, physical meetings and other less well recorded contacts. Further, the documents obtained show the particular focus on the upcoming review of the Tobacco Products and the Tobacco Excise Directives, and EU trade policy.

This is particularly concerning in the context of the brand-new Europe’s Beating Cancer Plan. The plan, released on 3 February 2021, includes the ambition to achieve a Tobacco-free Europe with fewer than 5% of the population using tobacco by 2040. The reviews of the Tobacco Products and the Tobacco Excise Directives are identified in the plan as opportunities to reduce the attractiveness of smoking, especially to European youth. Also included in the Plan is the ambition to enable a better implementation of the WHO Framework Convention on Tobacco Control (FCTC).

Acting EPHA Secretary-General Sascha Marschang said: “Europe’s Beating Cancer Plan is a positive and highly important initiative which we welcome, and in light of this it will be particularly important to insist on a more stringent implementation of FCTC Article 5.3, in order to ensure it achieves its goals.”

The report also examines the Commission’s response to the approaches of the industry. While the FCTC, and specifically Article 5.3, is designed to protect against such interference, the report finds that the EC struggles to fully implement these measures, e.g., by failing to limit contact, refusing disclosure of comprehensive information, and relying on reactive transparency. Without this important line of defense, the EC remains exposed to the industry’s relentless efforts to subvert policy.

The report includes recommendations to provide practical support to the Commission to enable a successful implementation of the Cancer Plan and the TPD review, inter alia by adopting the good practices of the EC DG for Health and Food Safety (DG SANTE) and national governments. Specifically, the report calls for a proactive transparency strategy, whereby details of all meetings and correspondence between EC officials and the tobacco industry and/or their representatives, are published on a central and easily accessible public register. Further, the EC could also adopt a clearly defined policy outlining how all EC officials should handle contacts with the tobacco industry, its allies and those promoting vaping products. Lastly, the report exhorts the EC to broaden the interpretation of “public interest” so that transparency around lobbying and the protection of public health override objections currently used to withhold information from public scrutiny.

“Simply put, to achieve a smoke-free generation and protect itself against industry advances, the EU will need to achieve smoke-free policy-making,” concluded Sascha Marschang.

An event ‘Industry tactics in a changing tobacco control policy environment” on 24 March 2021 at 16:00 CET discussed the findings of the report. Watch the discussion here