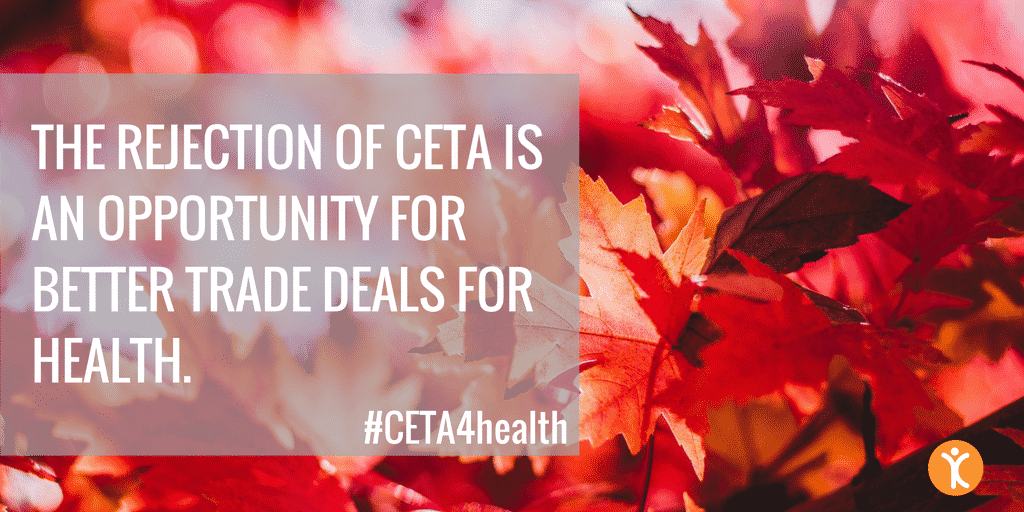 Brussels 23rd September – EU Trade Ministers agreed today to press on with the EU-Canada Comprehensive Economic and Trade Agreement (CETA) at the Informal Trade meeting in Bratislava, despite widespread protests and continuing concerns. Once the decision is confirmed at the next Trade Council meeting and CETA is signed on 27 October, Parliaments across the EU will have a vital opportunity to show that they have heard these concerns. The European Public Health Alliance now calls on the European Parliament and national parliaments to protect public health by refusing to ratify the agreement and call for a better deal for health and consumers.

“By ignoring the health costs of CETA which will come as a result of removing tariffs on unhealthy processed food and drinks, we are undermining public health policies and our ability to prevent, or manage non-communicable diseases (NCDs)  such as heart disease, respiratory diseases, type-2 diabetes and cancers, said Zoltán Massay-Kosubek, Policy Coordinator for Healthy Trade at EPHA. Leaving the investment protection measures unchanged will mean that investors – for example tobacco companies – can sue governments to stop public health laws which they believe interfere with their expectations of profits.”

Ministers also gave the green light to the continuation of negotiations on the controversial Transatlantic Trade and Investment Partnership (TTIP).

“TTIP is based on the naive assumption that increased trade in any product will benefit consumers and economies. But when it comes to tobacco, unhealthy food and drink, or meat products full of antibiotics, TTIP could do a lot more harm than good and end up costing us all more in the long term. And if TTIP requires Europe to bring regulatory regimes for medicines closer to the US model, then drug prices would become even more unaffordable as a result,” said Nina Renshaw, Secretary General of EPHA and public health representative on the TTIP Advisory Group to the European Commission.

#TTIPLeaks and Bridging the gap between trade and public health

Do Revised Investment Protection Rules in the EU-Canada Trade Deal Make Any Difference?