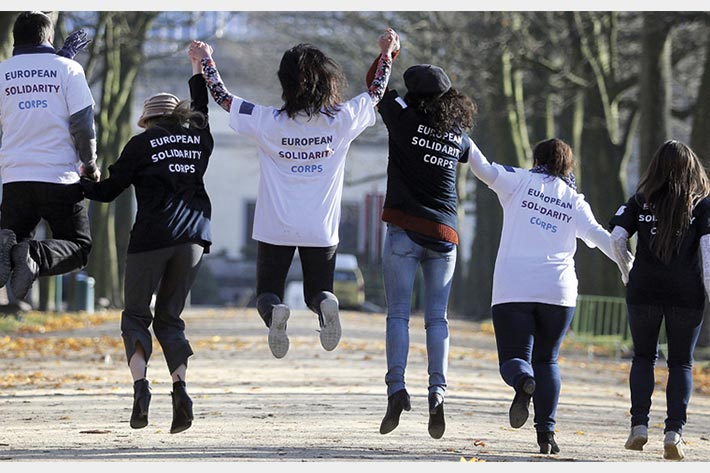 The recently launched European Solidarity Corps (ESC) is a new horizontal priority of the European Commission with the potential to support a wide range of actions leading to positive change, including health. By contributing to healthcare-specific activities, and helping disadvantaged groups (such as migrants or Roma) to gain access to healthcare services, the ESC can also complement the ongoing or expected EU policy initiatives on health such as tackling antimicrobial resistance, fighting the chronic disease epidemic, challenging the unaffordability of essential medicines or renewing EU action on alcohol harm.

The European Solidarity Corps, launched by European Commission President, Jean-Claude Juncker  during his State of the Union address in September 2016, aims to give 18-30 year olds the chance to take part in a wide range of activities – voluntary and otherwise – to build solidarity, and help communities across the EU. President Juncker has set ambitious targets, aiming for 100,000 participants by 2020.

The ESC will provide accessible opportunities for young people to express their solidarity through volunteering, a traineeship or a job responding to concrete societal challenges. The scheme will likely include a range of activities: individual placements with organisations in volunteering or occupational capacities, project initiatives designed by ESC participants themselves to work in their local communities, such as supporting vulnerable people to gain access to healthcare, or volunteering teams coming together from different countries to work on a specific community project are just some examples.

Commissioner for Budget and Human Resources, Günther Oettinger, announced that the Corps should have a stable legal basis by the end of May and a proposal for the ESC’s funding in 2018 will be prepared by the end of June, to be agreed by the European Parliament and Council before the end of the year, further highlighting the political momentum behind the initiative. Furthermore, the Commission intends to give the ESC its own budget line in the next Multiannual Financial Framework beginning from 2021.

The scheme is still taking shape, and the legal framework will consolidate the current phase, which depends on existing financing programmes, as well as including a dedicated budget for the future, laying the basis to achieve the involvement of 100,000 young people by the 2020 target.  EPHA responded to the online consultation and has been in dialogue with Commission officials, to explore ways to involve these young  volunteers in opportunities to support the public health community and strengthen the voice of public health in Europe.

The Commission must ensure that there are clear guidelines for the scheme, that both the young people and the NGOs taking part receive appropriate training and support, and that it contributes to tackling the youth unemployment crisis in Europe, without, of course, replacing existing jobs.  The ESC has potential to complement existing EU health policy actions, and as long as these safeguards are in place, the ESC could be a “triple win” for young people, participating NGOs, and for local communities throughout Europe.