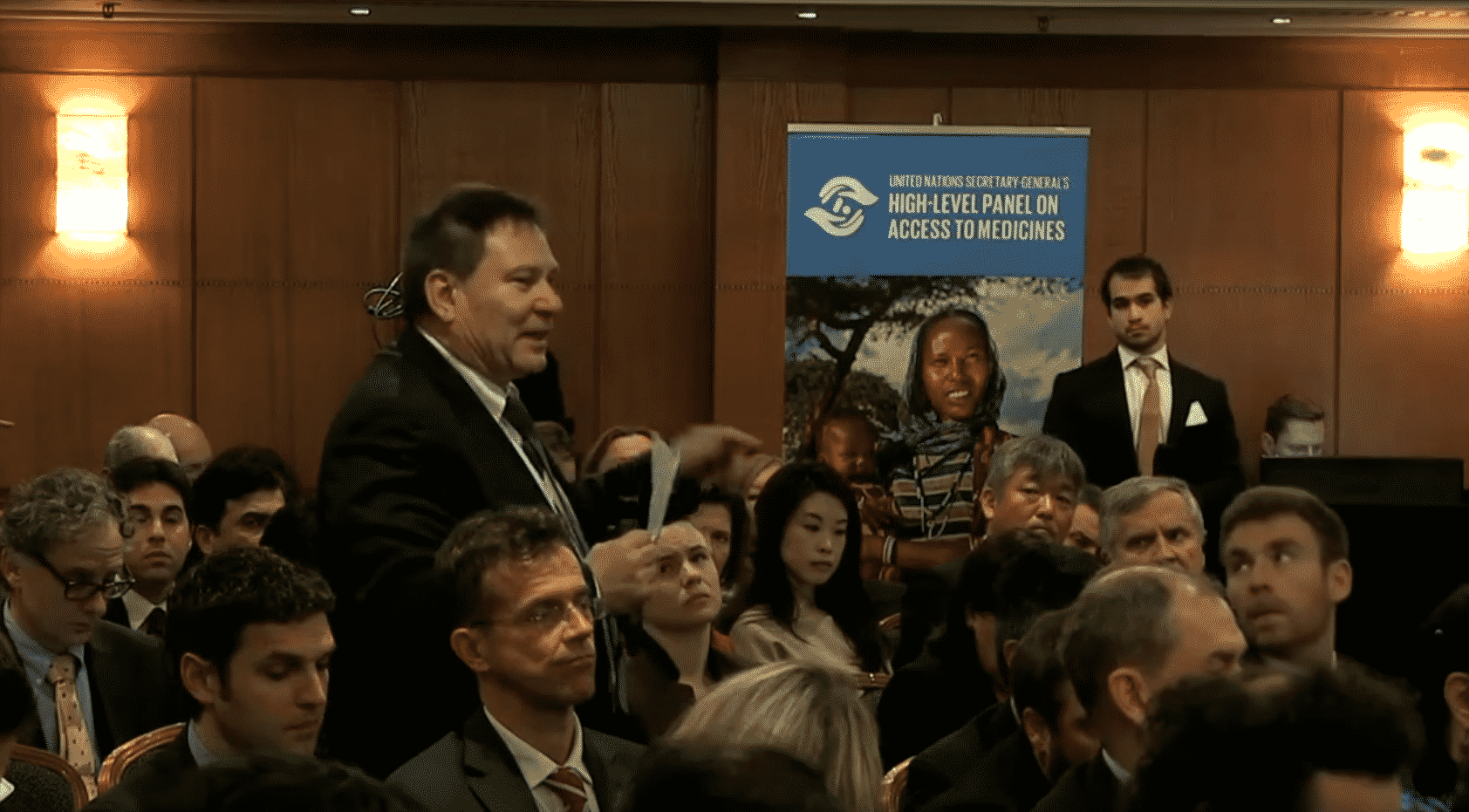 Convened by the UN Secretary General 16 world personalities review and assess proposals and recommend solutions to close the gap between inventors, international human rights law, trade rules and public health in the context of health technologies. Are EU officials simply out of step with reality?

The first Global Dialogue of the UN High Level Panel (HLP) on Access to Medicines took place in London in early March 2016. Organised by the office of the UN Secretary-General Ban Ki Moon, 16 global personalities were appointed “to review and assess proposals and recommend solutions for remedying the policy incoherence between the justifiable rights of inventors, international human rights law, trade rules and public health in the context of health technologies.”

I was privileged to represent EPHA at the London Dialogue, which was the first opportunity for the HLP members to listen to the authors of some of the 177 shortlisted contributions to the Panel’s final report due in June. Leading experts, including national governments, activists, organisations and pharmaceutical companies had two months to submit their proposals to “address the misalignment between the rights of inventors, international human rights law, trade rules and public health where it impedes the innovation of and access to health technologies” as the official call for contributions read.

The exorbitant price of medicines was the starting point for the discussion. What is new however, especially from an international standpoint, is that high prices are no longer just a serious concern for those living in poorer countries, but has a significant impact on those in developed countries too. It is clear that in Europe, as well as in the U.S., the main obstacle between a patient and his/her treatment is the price of medicines. Rationing has become the norm as a result of these price tags. Up until this point, the debate sounded very similar to the conversations we have been having in Brussels over the past two years i.e. since the scandal sparked by the price-setting for Hepatitis-C drug Sovaldi.

The HLP debate quickly turned to the issue of patents. Many of the expert interventions at the London Dialogue reaffirmed that today’s patent system is one of the root causes of the access and innovation crises countries across the globe are facing. So it is striking how out of step EU officials are with this reality. In its remarkably short contribution to the HLP, signed by DG SANTE, the European Commission emphasises that it “does not share the starting assumption of the call for contributions – presented as a definitive conclusion” and stresses that “intellectual property is a driver of innovation for new medicines and new uses for medicines”. This explains why the Commission practically never questions the usefulness or suitability of the patent system.

Unfortunately, the Commission has not been alone in fostering a culture of official silence over the taboo around pharmaceutical patents. The few individuals in Brussels who have for years highlighted the problems with patents were brushed aside by the Commission and other stakeholders as “extremists”. Thankfully, the current Netherlands EU Council Presidency has moved the conversation in the right direction by putting all of the issues on the agenda, including patents. It is worth comparing the EC’s submission to the HLP with the one from the Netherlands government. The Dutch call on the HLP to consider new models away from market exclusivities and monopolies (through patents or otherwise) as they conclude that “patent driven innovation may be effective for potentially profitable products, but leads to high pricing and an R&D priority agenda that reflects profit prospects which may not overlap with health needs”.

According to the Commission and in contrast to the Dutch perspective, there is a clear disconnect between the pharma-related policies implemented inside the EU and those in low and middle income countries. The EC contribution reveals double standards by suggesting that some flexibilities could be foreseen for low and middle income countries in order to facilitate their access to medicines, but the same harmful pharmaceutical business model must remain untouched inside the EU. This suggests that the Commission is either ignoring or turning a blind eye to the access problems that European citizens are facing, in order to defend the “business as usual” model inside Europe. Tellingly, there was no EC representative attending the London Dialogue to hear Dr. Yusuf Hamied, member of the HLP and a pioneer who transformed the AIDS response, reminding us that “if India 15 years ago had been in the patent system millions more would have died from HIV”. The U.S. Chamber of Commerce responded that the IP system needs to be further enforced on a global scale, implying that there is a lot of unfulfilled potential while pharma representatives insisted that patents are a synonym for innovation. The drug manufacturers chose to keep a low profile and their representatives made a few eyebrow-raising gaffes, such as a reference to drug donations under their corporate social responsibility programmes as tools to effectively tackle access problems in the U.S.

I left London feeling optimistic that the members of the HLP understood that this is a discussion about human rights and social justice as governments in richer and poorer countries alike struggle to improve health and universal access for their citizens. This will hopefully translate into a bold and ambitious final report which will offer a visionary strategy for the next fifty years. It is high time the European Commission catches up with the real access challenges facing Europe and uses today’s global political momentum to explore new incentives for medical R&D to serve public health needs away from the mentality of market exclusivities.

EPHA co-signed the following submissions to the HLP:

“Increasing the Transparency of Markets for Drugs, Vaccines, Diagnostics, and other Medical Technologies”

Submission by the European Alliance for responsible R&D and affordable medicines:http://www.unsgaccessmeds.org/inbox…