All about the money 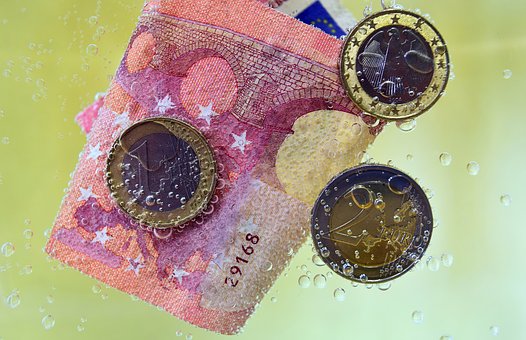 As the Eurobubble gears up for an epic fight over the next EU budget, let’s look at what EU spending does, or doesn’t do, for our health…and what it should deliver in future.

First, a reality check. The EU budget sounds like a vast amount of money, but compared to overall public spending in the EU it’s peanuts (around 1% of GNI). As the Commission points out, it costs less than a cup of coffee per person per day.  And within that overall budget, today’s EU health spending is tiny. Vanishingly tiny. The thinktank Bruegel has recently pointed out that Europeans think health is one of the bigger chunks of EU spending. It isn’t.  It’s so stingy that it’s practically invisible on this chart  showing how EU funds are spent. 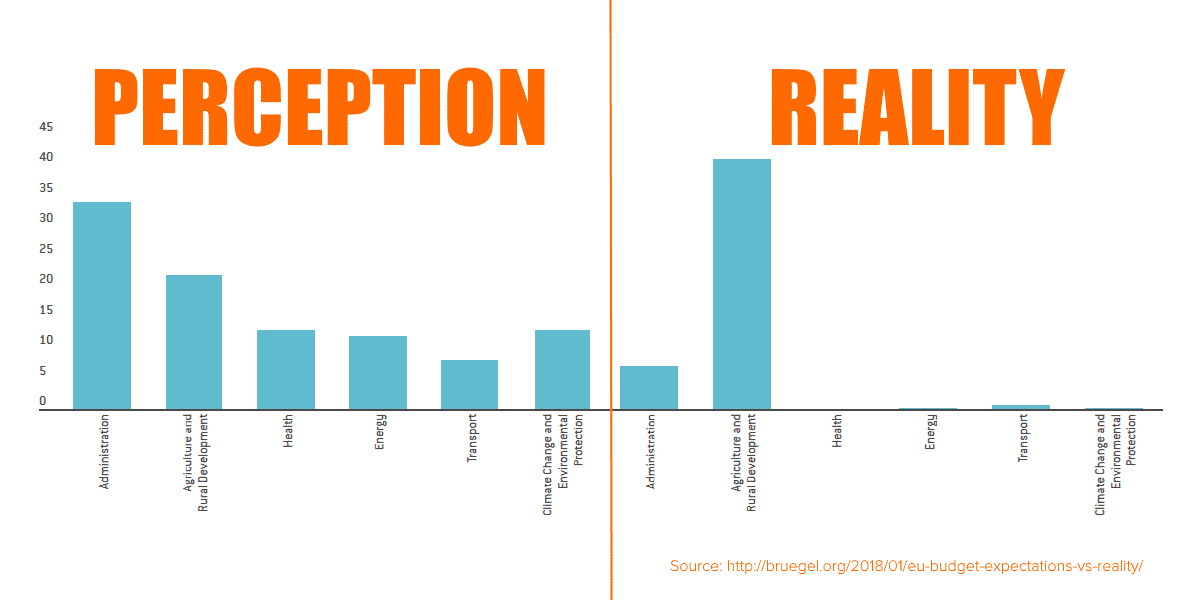 Only about one-twentieth of one percent of the total EU budget goes towards public health.  In contrast, the survey shows that people expect Europe to spend around 260 times more on something so important!

At the other end of the scale, people underestimate dramatically how much of the EU’s spending goes towards agriculture. So there is an awful lot of room for re-balancing. This mismatch of expectations with reality might also well explain some people’s disillusionment with the EU itself.

70% of Europeans want the EU to do more for health and social issues.  And yet, the first indicators of the direction of the post-2020 budget point to the usual big budget chunks plus a focus on today’s crises, (anti-)migration and security. In the current Commission consultation on the future EU budget, health is lumped under the heading for investment, innovation, research and the single market together with what looks like a bunch of inconvenient leftovers from the continued ‘growth and jobs’ obsession;  justice, consumer protection, environment, digital economy, food safety, and regional development, amongst many others.  Does this hint at a further sacrifice all the public interest policies on the altar of failed trickledown economics?

What about, instead of chasing crisis after crisis (and issues so sensitive that national governments won’t really allow the EU to tackle them, like refugees and defence), really planning for future generations? As I’ve written before, there is a serious risk that the legacy of this generation of politicians will be worse health and poorer quality of life for their children and grandchildren.  Europe can do more than any national government to turn that around.

The longer terms of office of the EU institutions compared to those of most governments, gives the EU a real advantage in that it can afford not to be short-termist in its thinking. So it  should look further ahead and head off looming challenges. In contrast to national Health Ministries, the EU institutions don’t have to make painful choices between buying new hospital equipment or employing more nurses or managing integration with social care. The EU must therefore look much further ahead to really fulfil its mandate to support Member States to  protect health.

So, how can the EU better serve countries’ health needs and meet people’s expectations? For starters: Take AMR seriously. If the reality turns out anything like the projections, drug resistant infections will return us all (and our health services) to the “dark ages of medicine”, where childbirth, routine surgery and cancer treatment become life-threatening in their own right.  If a government study had warned that one disease (imagine, ebola) would kill 700,000 Europeans every year by 2050, Europe would have left no stone – or euro – unturned in making sure it didn’t happen. The same cannot yet be said for AMR.  Last year’s EU AMR Action Plan contained devastatingly little tangible action and a big fat zero in new resources.  Concretely, a top priority should be to beef up the budget for the European Centre for Disease Prevention and Control (ECDC), whose prominence in the public consciousness will only grow in the coming years. Don’t let that be to the tune of ‘Why didn’t they do more to stop this?’

Next, take policy action to prevent diseases  – for a real boost to growth, jobs and productivity. The vast majority of today’s chronic diseases – including cancers, respiratory diseases, mental health issues, diseases caused by poor diets, etc. – are preventable. They cost our health services a fortune, and waste Europe’s most valuable resource and competitive edge – our people.  Thanks to the WHO, OECD and successful strategies from around the world, we know exactly what needs to be done. To hammer that message home, Michael Bloomberg and former US Treasury Secretary Larry Summers have just set up a fiscal policy task force, under the headline “To improve global health, tax the things that are killing us”.  Now the EU can’t easily “do” fiscal policy, but it must get out of the (legislative) way and allow national governments to reap the benefits – and the revenue, which can go back into taking care of those diseases which can’t be prevented.

And finally, respect the EU Treaty as it is. Don’t mess with national health systems’ organisation or spending.  It seems likely that the well-intentioned Commission proposal for mandatory cooperation on Health Technology Assessment (HTA) will be shot down (or ignored to death) in Council for overstepping the mark, which would be a wasted opportunity. Instead, help national health authorities to work together more effectively and efficiently, by for example, strengthening the checks and balances at the European Medicines Agency and in the Innovative Medicines Initiative: supporting them to break the silence on unacceptable prices set for new treatments; and requiring transparency throughout the medicines R&D process on clinical trials, development costs and the share of public (including EU) funding.

And the really good news? All this is feasible within today’s miniscule EU health budget. Done smartly, EU action on these things will save money and generate new resources for national governments too. By focusing on changing policies rather than budgets, the EU can deliver so much more.