How much is air pollution costing our health? 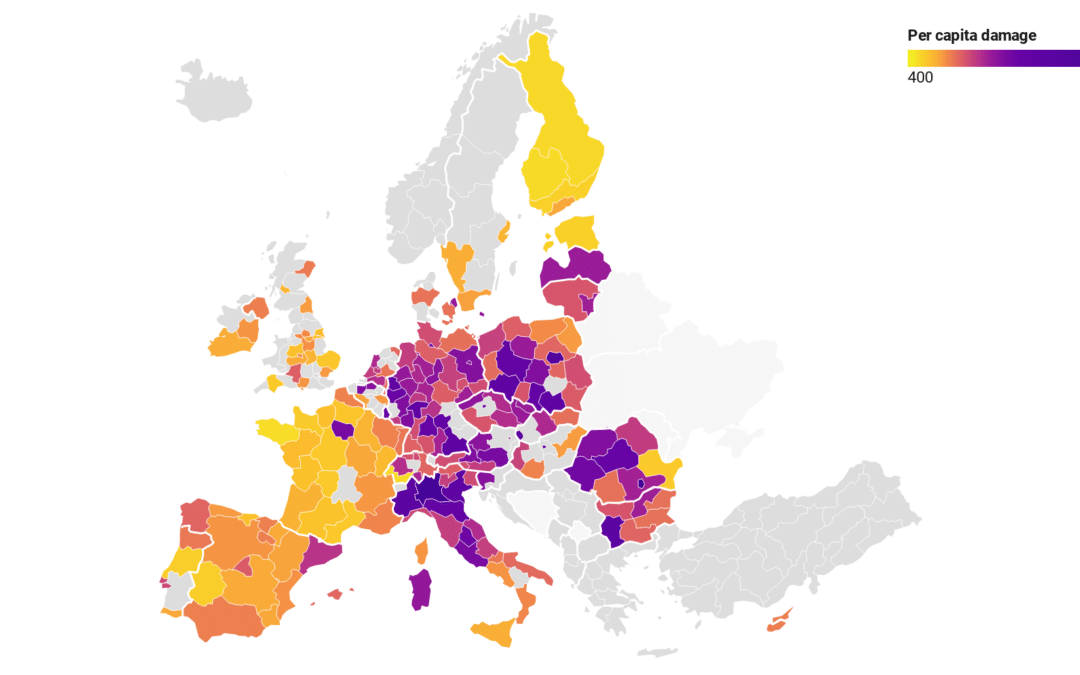 21 October 2020, Brussels – Air pollution costs the average European city resident €1,276 per year, according to the largest study of its kind.

Though Bucharest in Romania tops the Europe chart for highest costs faced by the average city resident, based on intense pollution levels, Italian cities dominate the top 10, based on their pollution and higher general costs.

Where are costs highest?

Air pollution is the number one cause of premature deaths from environmental factors in Europe, according to the EEA. The problem is greatest in cities, where two thirds of Europeans live. Two thirds of cities break clean air standards set by the World Health Organisation. PM, NO₂ and O₃ cause about 400,000 early deaths annually.

EPHA Acting Secretary General Sascha Marschang said: “Our study reveals the magnitude of the damage toxic air is causing to people’s health and the huge health inequalities that exist between and within countries in Europe. To a large extent, the situation can be influenced by transport policies and cities can reduce costs by switching to zero-emission urban mobility. Governments and the European Union should bear these costs in mind for transport policy in order to support, not to hinder, a healthy recovery from the COVID-19 pandemic.”

The study examined 432 cities in all EU countries plus the UK, Norway and Switzerland. Added together, air pollution costs for city residents amount to €166 billion per year, or €385 million per city on average. When grouped by city rather than per capita cost, those living in big, expensive cities tend to face the highest pollution costs due to population density, higher earnings and expenses. But cities in Central and Eastern Europe buck this trend and feature high in the impact table despite lower income levels as particularly bad air pollution takes its toll. Hence the average Bucharest resident faces the highest costs, at €3,004, while those in unpolluted Santa Cruz de Tenerife face the least, at €382.

Transport is a major source of urban air pollution, costing €67- 80 billion in the EU28 in 2016, according to a previous EPHA report. This study shows that even small changes to transport habits and city policies can make a substantial difference to such costs. A 1% increase in the average journey time to work increases the costs of PM10 emissions by 0.29% and those of NO2 emissions by 0.54%, the study found. A 1% increase in the number of cars in a city increases overall costs by almost 0.5%.

The study, conducted by CE Delft, is the biggest of its kind, in terms of number of cities and pollutants studied. Researchers took the latest complete data from Eurostat and official monitoring stations, from 2018, to calculate the harms caused and the costs related to resulting illnesses. Researchers excluded indoor air pollution, a significant cause of illness.

EPHA is calling for government policies to reduce oil-based transport with more sustainable, active and zero-emission alternatives, particularly walking, cycling and clean vehicles, based on e-mobility.

VISIT THE REPORT WEBSITE
FIND OUT MORE ABOUT THE LAUNCH EVENT