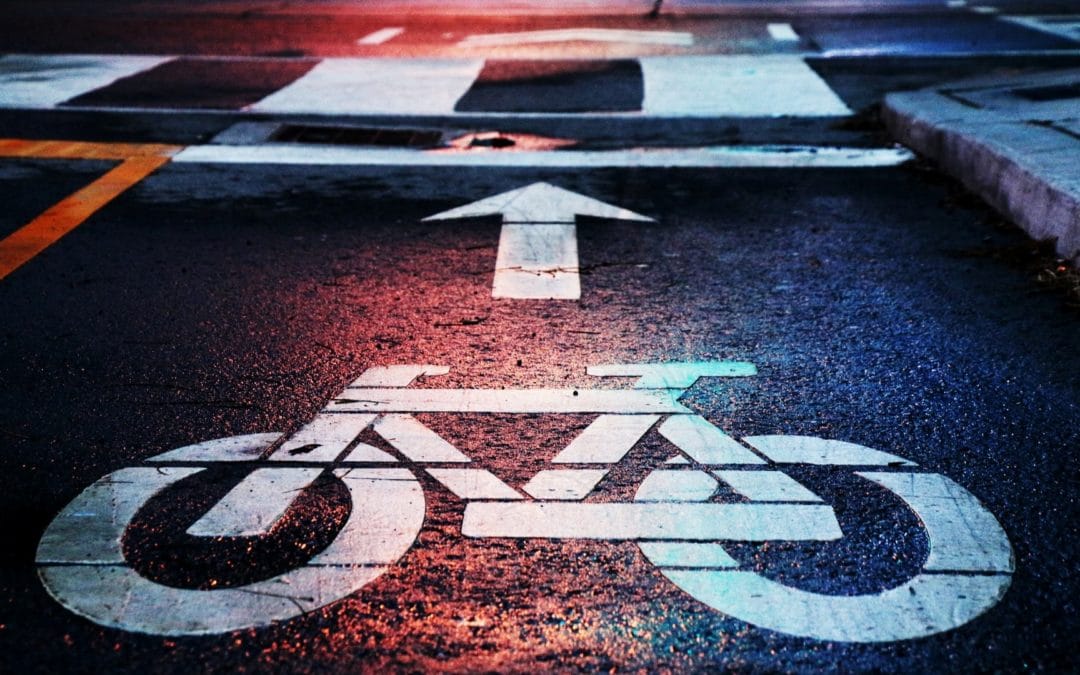 11 June 2020, Brussels A clear majority of urban residents across Europe do not want to see air pollution return to pre-Covid-19 levels and support profound changes in transport to protect clean air, according to fresh YouGov opinion polling in 21 European cities.

Levels of air pollution from traffic and other sources plummeted when countries imposed pandemic lockdown measures. Post lockdown, pollution has ramped back up in China, compounded by unusually high levels of commuter traffic.

Even though there is reluctance to use public transport due to the potential risk of contagion, regular users of buses and trains said hygiene is a deal-breaker. Four in five people (81%) who primarily used public transport before the pandemic are willing to return: 54% said they will start riding buses, trams and trains again if sufficient hygiene measures are taken to prevent Covid-19 contagion; the remaining 27% are set to return regardless of risk. 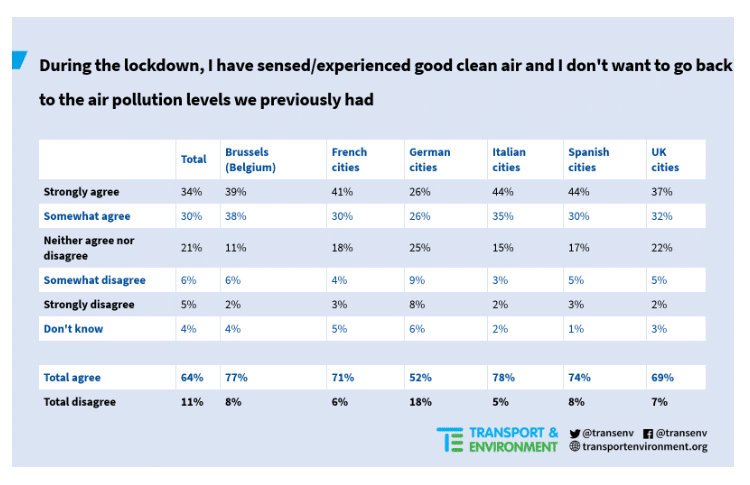 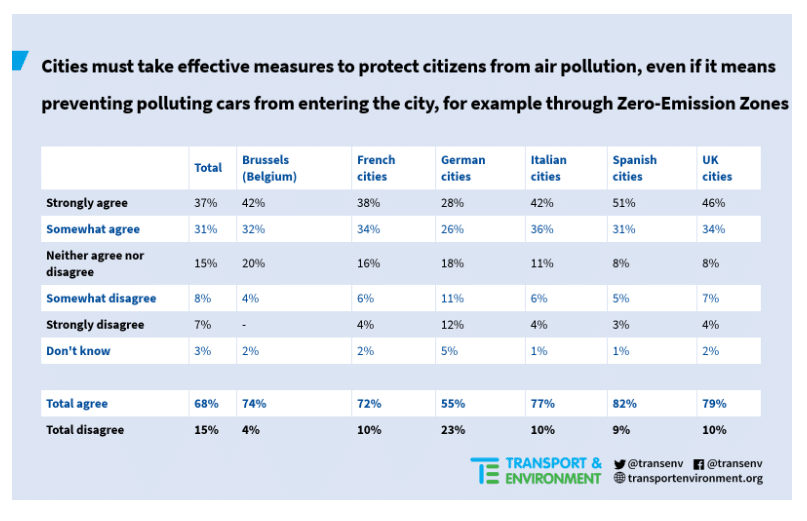 Sascha Marschang, Acting Secretary General of the European Public Health Alliance (EPHA), said: “People have taken a deep breath of clean air and decided to keep it. Now the invisible killer is visible: air pollution made us sick, worsened the pandemic and hit the most deprived the hardest. Reducing health inequalities by designing a pollution-free city transport system cannot wait any longer.”

When surveyed online for T&E and EPHA between 14 and 21 May 2020, the 7,545 adults of voting age in Italy, Spain, Germany, France, the UK and Belgium gave remarkably consistent answers, despite their various economic, class, age and gender backgrounds.

While 14% of the city dwellers surveyed tended to cycle on work days before lockdown, now one in five (21%) plan to cycle more when lockdown ends fully. For walkers, the figures are 32% and 35% respectively. 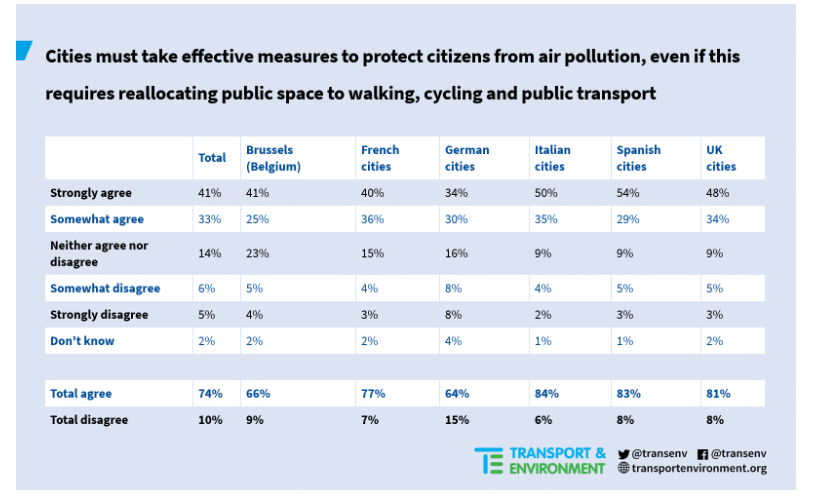 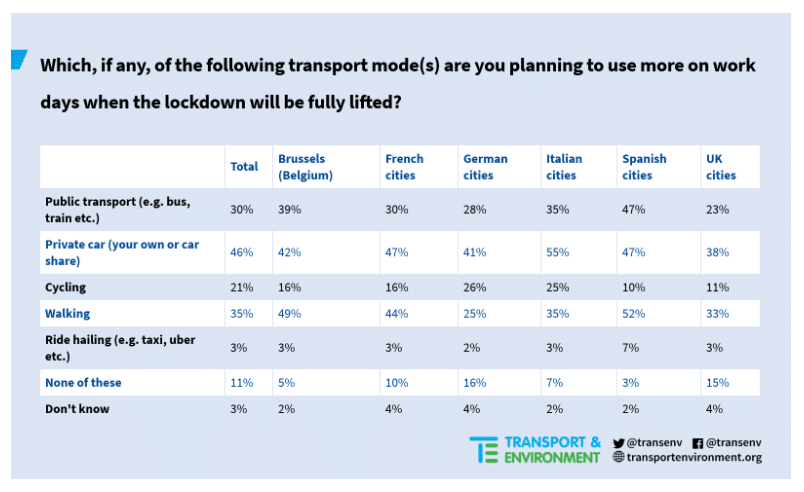 Some city mayors have been quick to adapt transport systems during the pandemic. Berlin has new ‘pop-up bike lanes’, while greater Paris is investing €300 million in a 680km cycling network. Krakow is upgrading its cycling infrastructure and widening pavements, while Brussels is deprioritising cars in its city centre and adding 40km of bike lanes. Dublin is removing car parking to boost cycling safety and physical distancing.

Late last month the European Commission unveiled a €1.85 trillion recovery plan to reboot the bloc’s economy baldly hit by the pandemic. The proposal includes a 25% climate spending target. It stresses the need to prioritise investments in sustainable vehicles, charging stations and cycling.

Air pollution is the biggest environmental health risk in Europe, according to the European Environment Agency. It caused about 400,000 premature deaths in the EU in 2016, the EU agency estimates. Those living in polluted, big cities are more at risk from Covid-19, EPHA has warned. Traffic pollution is a major contributor to scores of active EU infringement procedures  brought by the EU against governments worth billions of Euros in fines.

The interpretation of polling results in this document and in a complementary briefing have been approved by YouGov.
Full poll results can be found here.

All figures, unless otherwise stated, are from YouGov Plc.  Total sample size was 7,545 adults in metropolitan areas around Barcelona, Madrid, Rome, Milan, Paris, Marseille, Lille, Lyon, Toulouse, Nice, Berlin, Hamburg, Köln, Frankfurt, Munich, Greater London, Greater Manchester, Birmingham, Leeds and Glasgow. Fieldwork was undertaken between 14th – 21st May 2020.  The survey was carried out online amongst respondents who are mainly from specific urban areas. The figures have been given an even weighting for each metropolitan area to produce an ‘average’ value.