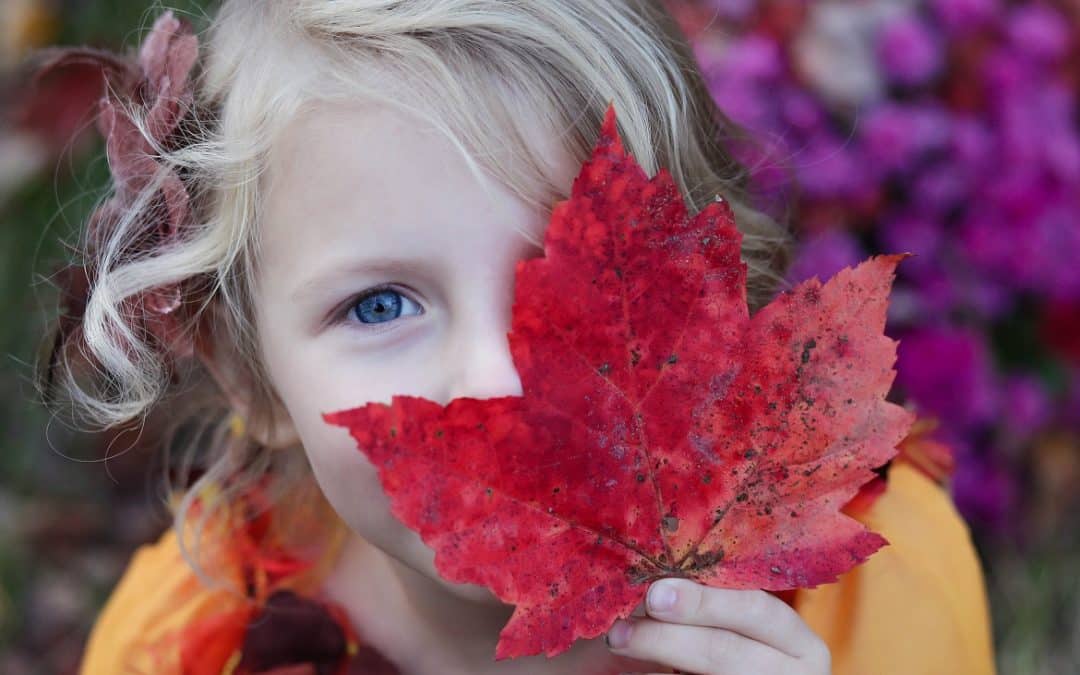 The UN Convention on the Rights of the Child, ratified by all European Union (EU) countries and used by the European Commission to guide its actions,[1] provides that “In all actions concerning children … the best interests of the child shall be a primary consideration.”[2] Nevertheless, this principle seems not to have been upheld in the EU, even in areas of utmost importance for child protection, such as infant nutrition.

Zooming in on infant milks

There is widespread consensus that breastfeeding is the ideal way of providing food for the healthy growth and development of infants.[3] Optimal breastfeeding is so critical that it could globally save the lives of over 820.000 children under the age of 5 years each year.[4] It is also widely agreed that the WHO International Code of Marketing of Breast-milk Substitutes (the Code) sets the minimum global standard in terms of marketing infant milks. One of the Code’s guiding principles is that no commercial, or educational and informational materials should “idealize the use” of breastmilk substitutes.[5]

This requirement has been implemented in EU law, which provides that the: “labelling, presentation and advertising of infant formula, and the labelling of follow-on formula shall not include pictures of infants, or other pictures or text which may idealise the use of such formulae”.[6] EU legislation also significantly restricts the use of nutrition and health claims on infant milks,[7] and their use will, alongside such claims on infant milks for ‘special medical purposes’, be completely banned from 2020 onwards.[8]

However, a series of investigative reports led by the Changing Markets Foundation, Milking It, [9] puts in doubt whether these legal principles and obligations, and their spirit, are actually being observed, and raises questions of legal interpretation and compliance.

Nutrition and health claims in disguise?

The latest investigation highlighted a claim used in the EU, namely that of infant milks “for hungrier babies”, which provides an interesting case study.[10] What kind of claim is this, and, given the existing legal framework, should it actually appear on infant milks?

A nutrition claim: “means any claim which states, suggests or implies that a food has particular beneficial nutritional properties due to:
a) the energy (calorific value) it
i) provides;
ii) provides at a reduced or increased rate; or
iii) does not provide; and/or
b) the nutrients or other substances it
i) contains;
ii) contains in reduced or increased proportions; or
iii) does not contain”[12]

A list of allowed nutrition claims and conditions relating to their use can be found in the EU Claims Regulation.[13] Further limitations apply to infant milks.[14]

Formula “for hungrier babies”, as the UK National Health Service (NHS) explains, contains more casein than whey, making it harder for babies to digest, which allegedly contributes to the feeling of satiety.[15] The basis of the claim essentially relates to the content of nutrients or other substances in “reduced or increased proportions” – one of the definitions of a nutrition claim. The claim itself however does not mention energy content or any nutrient or other substances, and is therefore not readily identifiable as one. Could it be a nutrition claim ‘in disguise’? If so, it would not be allowed as neither casein, nor whey are mentioned as substances that could give rise to a nutrition claim.

A health claim “means any claim that states, suggests or implies that a relationship exists between a food category, a food or one of its constituents and health”.[16] The ‘for hungrier babies’ claim does clearly imply that the product provides a certain physiological benefit. However, is the feeling of satiety an attribute of health?

The European Court of Justice (ECJ) in its Deutsches Weintor decision, supports a wide definition of the notion of ‘health claim’. In its judgment, the Court considered that the concept of health should be interpreted broadly, and explicitly ruled that, in the case at hand, a health claim would cover a description such as “easily digestible”.[17] Given that the formula in question implies a benefit by acting on the digestive system – the product is more difficult to digest compared to other infant milks which produces its alleged effect – it would not be unthinkable that ‘for hungrier babies’ could actually be a health claim.

Should the latter be the case, this claim would be prohibited under EU law, given that the only category of health claims potentially allowed on infant milks relate to the reduction of allergy risk to milk proteins.[18] Even if health claims on satiety were allowed, any health claim needs to be authorised on the basis of a scientific assessment before it can be used.[19] And this particular claim would not have fared well on scientific grounds: according to the NHS “there’s no evidence that babies settle better or sleep longer when fed this type of formula”.[20]

Idealising the use of infant milks

Even if “for hungrier babies” were to be a general claim, defined as: “any message or representation, which is not mandatory under Community or national legislation, including pictorial, graphic or symbolic representation, in any form, which states, suggests or implies that a food has particular characteristics”,[22] it would still be barred from use if it idealised the use of infant milks.

But what does the prohibition to ‘idealise’ mean? Both the Code and EU legislation call for a broad interpretation: the restriction is not just about idealising a particular product, but the use of formula in general, implying that the restriction covers all expressions that are likely to confer a positive image of the use of infant milks. Not just on the label, but also in relation to all presentation and advertising, including websites. Idealisation should also be read in light of the founding principle of EU consumer and food law, which aims at preventing any practices that may mislead consumers.[23]

What expressions are covered? Firstly, showing pictures of infants is expressly forbidden. Nevertheless, examples of such images on product webpages do appear.[24] Secondly, statements implying similarity between formula and human breastmilk are clearly not in line with the Code, but still occur in the EU,[25] despite scientific consensus that infant formula cannot imitate breastmilk.[26]

The next step in interpreting ‘idealisation’, can draw on consumer research into the ‘health halo’ effects associated with claims made on food. For instance, people tend to underestimate caloric content of dishes when a restaurant claims to be healthy.[27] Even the general image of a company may matter. Studies have found that consumers “use corporate-level information to make inferences about product-level attributes”,[28] meaning that a company’s image-building activities may actually translate into people’s evaluation of the healthfulness of its products.

In this light, claims about a company’s strong reputation, its science-based nature and long tradition, examples of which abound in the latest Milking It investigation, can be expected to provoke a positive emotional response towards the use of its infant milk products: exactly what the prohibition to idealise the use of formula seeks to prevent.

A further interesting finding is that such reputational claims tended to be “more prevalent on the packaging of products sold in countries with restrictions on nutrition and health claims.”[29]  This would confirm the idea that claims, while many in type and number, in essence just have one aim: to confer a positive image to a product, thereby idealising its use. 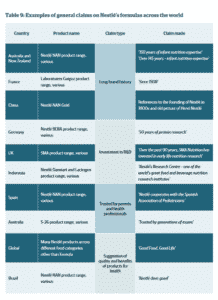 Where does that leave the ‘hungrier babies’ claim? Despite the difficulties resulting from our attempt to classify the claim, it does appear to contribute to ‘idealising’ the use of infant milks, and the flimsy evidence-base underpinning this claim furthers erodes its legitimacy. That despite such ambiguities these types of claims continue to be made in the EU is not suggestive of a watertight enforcement framework to protect infants from eager marketers. Moreover, Europe was recently called out as the lowest performing region in terms of implementing comprehensive legislation in line with the Code.[31]

Towards a systematic approach to child marketing

But marketing of infant milks is only the beginning. The saga continues with follow-up and toddlers’ milks, which are unnecessary and potentially unsuitable, [32] but are marketed without being subject to the same regulatory restrictions as infant milks. At further stages of maturity, not just parents, but children themselves become the targets of marketing too, as ‘junk foods’ high in fat, sugar and salt (HFSS) are being pushed onto them. At the stage of (young) adolescence, alcohol marketing makes children’s exposure to unhealthy food[33] marketing even more significant, in clear opposition to the commitments that member states of the World Health Assembly, including all EU Member States, have made to restrict the exposure of children to the marketing of HFSS food[34] and alcoholic beverages.[35]

Recent negotiations on the revision of the Audiovisual Media Services Directive (AVMSD), dubbed a ‘once in a decade opportunity’ to protect children from marketing of alcohol and HFSS food,[36] are well-on their way to becoming a ‘once in a decade inter-institutional failure’ to put the best interests of the child first. Part of this can be explained by the fact that health is tucked-away as a minor component in a Directive dealing primarily with cultural and digital questions. This is despite the EU’s duty to ensure a high level of public health protection in the development and implementation of all its policies.[37]

As the EU struggles to reinvent itself and show its added value for Europeans, the next Commission has a fantastic opportunity to start on the right foot by initiating a process towards the adoption of a dedicated, comprehensive flagship Directive on child marketing. Such an instrument should, in line with the UN Child Convention, identify children as ‘right holders’ and follow a life course approach, starting from birth until the age of 18, with the best interests of the child as a primary consideration.[38]

A radical child protection and empowerment agenda with strong compliance mechanisms, is not a bad place to start for an institutional structure eager to win the hearts and minds of people. After all, “The Union’s aim is to promote peace, its values and the well-being of its peoples”.[39]

With special thanks to Prof. Amandine Garde, Professor of Law at the University of Liverpool, for reviewing.